Upwork is one of the largest freelancer communities available online today. It was formed after the merger in 2013 of Elance and oDesk, which were already two of the biggest players out there at the time, and was subsequently rebranded as Upwork in 2015.

It’s the third platform I tried out (after starting with Freelancer.com and then testing out Fiverr). Unfortunately, my experience with it was cut rather short.

After registering my account I immediately proceeded to set up a project (I was testing a project post for my book “Dreams of Monsters ABC” on Freelancer vs. Fiverr vs. Upwork to see what the difference in bids would be in terms of both quality and price). The project was posted at 11:38pm on 6/15/2018 (by the way the empty 4th bullet point in the email below is, I assume, a typo on their end as this is a direct screenshot): 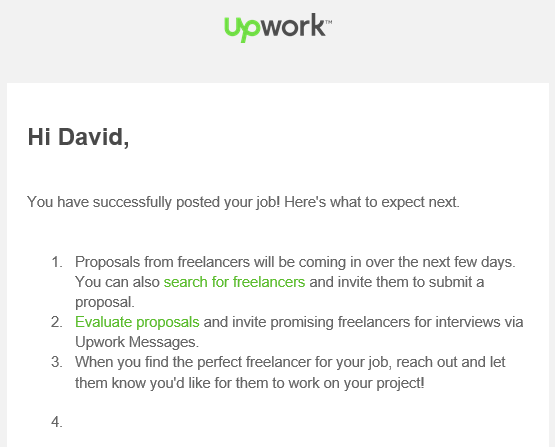 Exactly 2 minutes later (at 11:40pm), I received the following email: 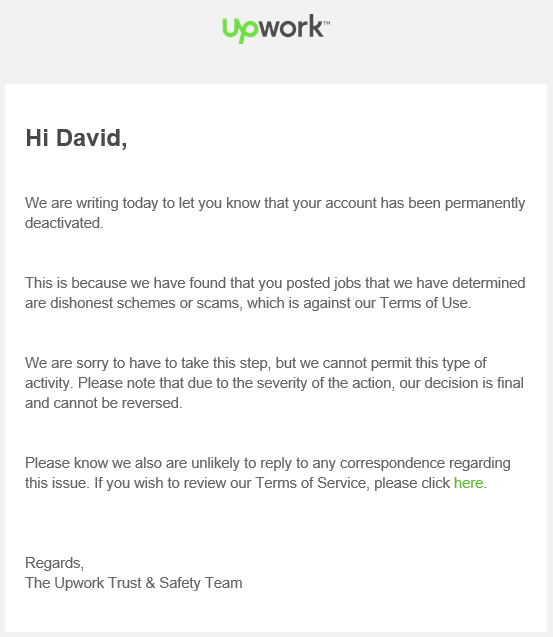 I was a bit shocked of course, particularly because of how harsh their words were. “Dishonest schemes or scams”? The project I posted was to look for illustrators for an ABC children’s book about robots showcasing emotions; not sure what’s dishonest or scheming about that. They were telling me I was permanently deactivated and that they were unlikely to reply to any correspondence regarding the issue. In other words “Go away and don’t try pleading your case.”

Given that it took them only 2 minutes to make their conclusion, I can only assume that an automatic rule-based system decided there was something fishy about my post. The only thing I can guess may have triggered their system is that my project post included a file with images to show potential bidders what style of illustration I was looking for. Each image included a link to the source as the images weren’t mine (the images were found on Pinterest). Perhaps they felt I was misusing art that wasn’t my own? Or perhaps they thought I was trying to advertise a site (to be very clear, I wasn’t).

I tried re-registering with the same email address and, no surprise, found they had blacklisted me and were giving me the generic “technical error” message:

Tried registering with another email address and it worked, so I guess they are not (at least currently) doing IP blacklisting.

I’d like to reiterate that there was absolutely nothing dishonest about what I did, and I was the victim of a rule-based engine that was built as a one-way communication tool preventing me from defending myself. That means my money went to freelancer.com and one of their freelancers instead. Upwork may work out for some, but in my case this experience means I most likely won’t be using Upwork any time soon.