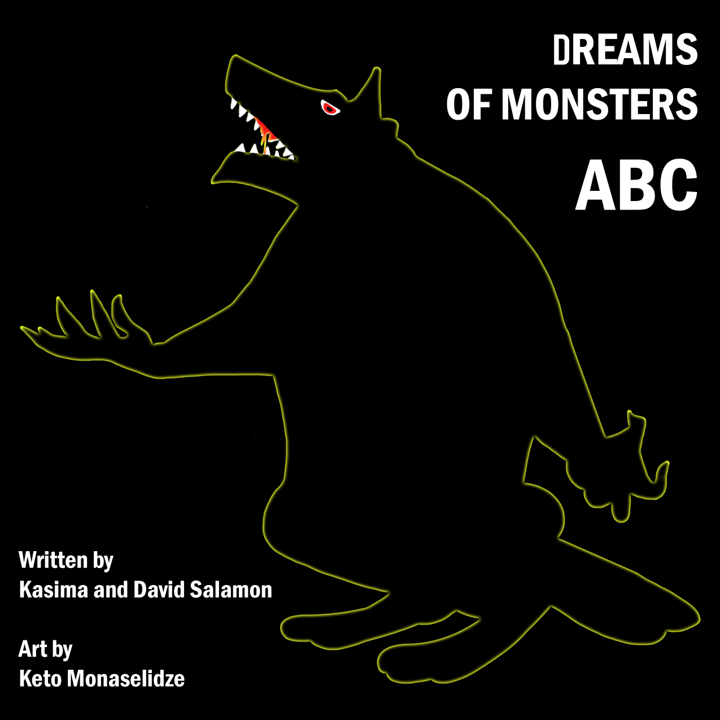 Dreams of Monsters ABC was my very first published children’s book. It was also one of the most fun and exciting independent project I’ve worked on.

The book can be found on Amazon here: https://amzn.to/34i6Uah. Please check it out and let me know what you think!

I followed a straightforward process in order to publish this book which took around 3 weeks:

My daughters are currently 3.5 and 2 years old, so they’re both around the age where they’re learning how to read. That starts with learning the letters of the alphabet of course. It’s something I’m obviously passionate about, and by doing some very basic keyword analysis as well as doing some preliminary research on Amazon for similar products, it’s clear I’m not the only one. ABC kids books are perfect gifts for parents with toddlers, particularly when they make learning the alphabet fun.

Nobody said this would be easy though – just look at the number of results for “abc book” on Amazon!

Ok, so maybe monsters aren’t the most obvious choice for a book targeted at 0-4 year olds… but my daughters would beg to differ, and while picking a theme of course I consulted them. Luna (my older one) told me, when she was 2, that she wanted to grow up to be a vampire (Hotel Transylvania was the culprit there). I offered her a few different themes for the first book, and she kept pushing for monsters. Thinking about it some more, I figured an advantage here would be that parents could also find some enjoyment in reading about monsters. So the goal here was to create a book that preserved the core of what monsters are – exciting, fascinating, and a little scary – without making it so scary that children wouldn’t want to read it or that parents wouldn’t want to give it to their children. Challenge accepted!

If Monsters aren’t your thing, check out the book I wrote on princesses – Princess Spells ABC.

Before going too far down the rabbit hole, it’s important to put together an outline for the book. Otherwise you find yourself going back and changing core elements that are time-consuming to edit once you’re already at the illustration/writing/formatting phases of the publishing process.

It’s also important to have a clear outline of what your book will require in order to provide clear guidelines to freelancers about what it is you’re looking for. You need to know exactly what illustrations you’ll need and how your text will work alongside the illustrations. I use Adobe InDesign to put mockups together of what the content will look like ahead of time, and usually write 80% of the text in the book before going out to look for illustrations. Why? Because often as I write I find inspiration that may alter the direction of the book, and I don’t want to revisit that once the illustrations are already under way. It’s also important to decide what the trim and bleed settings for the book will be (wouldn’t want to end up with square illustrations if you want to make a book that’s a portrait aspect ratio).

For the content of Dreams of Monsters ABC, I decided to write a short passage for each monster with some small rhymes to give some storyline to the book and help kids (and parents) discover the monsters. For example, here’s the Headless Horseman:

Through dark woods his horse he rides

And somewhere else his head resides

Who’s that galloping through the night?

Until his own head he regains

He’ll search the forests and the plains

I decided to overlay the text on top of the images, which is a guideline I provided to my freelancer so she’d know to leave some space on the illustration to accommodate for the text.

Finding illustrations is much easier nowadays than it was in the past, thanks to the multitude of freelancer communities that are available. My personal favorite is Freelancer.com, and for Dreams of Monsters ABC I posted a project there to gather some bids. Check out my guide on sourcing illustrations from Freelancer.com here.

If you’re looking to start using Freelancer.com to find illustrations for your own book, click here to sign up and you’ll get a $20 credit to get you started!

While looking through the bids for this project, there were 3 freelancers that I shortlisted. They were all terrific and had fairly distinct styles.

I was initially tempted by options 2 and 3 which I think appealed to me more as an adult because they were less abstract. Between the two I had a preference for option 3. However my kids were pretty adamant that option 1 worked best, so I decided to do a bit of user testing to select the one that would work best.

Note: make sure to always request the layered PSD files from your freelancer as well as these come in handy (in this case I made a few tweaks later on that were way easier to do myself than to go back to the designer, and I was also able to re-use some of the illustrations for other things like the cover).

Throughout the process it’s important to test your ideas with other people around you, particularly those that are in your target audience (in my case that means both kids themselves as well as parents of young children).

I had tested my concept before getting to the illustration stage, but I was now at a fork in the road – two very different designs to choose from that would shape the look and feel of my book. My personal preference was for the more realistic picture (option 3 above) but my own children (and some of their friends) were pushing me to go for the more abstract and playful option 1. I decided to run a Facebook poll to get some more data. It’s easy and free to do this and can help give you a second opinion from the crowd. On a side note, it’s a good reason to have a large community of contacts on Facebook…

Ok so these are FAR from being statistically conclusive results. 27 votes is clearly not enough to judge a winner, but it’s still somewhat of an indicator. At least it showed me that there are quite a few adults (since all the respondents were adults) that were in favor of the more abstract option. I did also receive some qualitative feedback while posting this poll with some folks saying it shouldn’t be too scary as that Cerberus may cause some nightmares. Good reminder to keep a good balance of fun in the illustrations, which I passed on to the designer as I had now made my choice to go with option 1: Keto Monaselidze, who you can see the art is attributed to on the cover of my book.

I worked closely with Keto during the design process to guide the tone of the illustrations, but didn’t provide too much guidance as she proved to have lots of creativity which I didn’t want to stifle. I think that’s an important part of working with a designer, particularly as they are more likely to put heart and soul into the project if they feel like they can bring some of their own elements and creativity to their work rather than just following your exact guidelines.

Here are samples of a few of the pages from the final manuscript.

Once I was done with each page I moved on to the cover (front and back). I hadn’t thought about these when getting my illustrations from the freelancers (something to think about in the future) so was left to do it myself. I decided to go for a dark cover with just the outline of a monster, and the werewolf fit the design perfectly. All I had to do was grab the werewolf layer from the PSD for that page and add some outer glow to make the outline stand out on the black cover. For the back, I took the Yeti (can we agree he looks hilariously cute?) and added a bit of text and my logo.

I can’t stress the importance of proof-reading enough. It’s embarrassing to have grammar or spelling errors in your book. Having customers spot those after they’ve purchased the book isn’t what you want. I would consider myself pretty detail-oriented and I was very careful when reading through all the text in my book. However, I missed a spelling error in the back cover (“creatues” instead of “creatures“). How embarrassing! Fortunately, it was quickly caught by a friend mine. Unfortunately, though, it happened after publishing, so I had to quickly make edits to the live book. No matter how careful you are, always have a handful of people to read through your entire book before you publish it to avoid silly mistakes.

Finally, the publishing phase. I’ve written an overview on self-publishing with KDP. This was my first time through so obviously I made mistakes with trim, with bleed, with files. I even made a mistake using a font that wasn’t embedded and which I didn’t have rights for. I went through my entire manuscript to ensure the font I used was one I had commercial rights for. While doing final checks I realized some of my gutter (inner) margins were too small so fixed those as well. Basically lots of rework that added about 30% more time to the project. Had I known or planned ahead more carefully, I would have saved a lot of time.

In the end, though, I’d finally gotten there and was able to publish my book on Amazon. Tons left to do (*ahem* marketing is hard), but the work to get it published was done. This mark the start of my adventure as a self-published children’s book author! If you’re interested, please check out my book on Amazon here: https://amzn.to/34i6Uah.

Thanks for reading and let me know your comments on this post, or on the book. If you do purchase the book, I would appreciate unbiased reviews on Amazon to let other prospective customers know what you think.

We’ve now made Dreams of Monsters ABC available on YouTube as a “read aloud” book. I started noticing “read alouds” recently after my daughters browsed their way to some of these videos on YouTube. So, I decided this was a perfect place to give Dreams of Monsters some extra visibility. Please check out the video here: https://www.youtube.com/watch?v=WG0lCAVDxBQ&t.

If you have a chance to take a look at Dreams Of Monsters ABC, please let me know what you think by leaving a review!